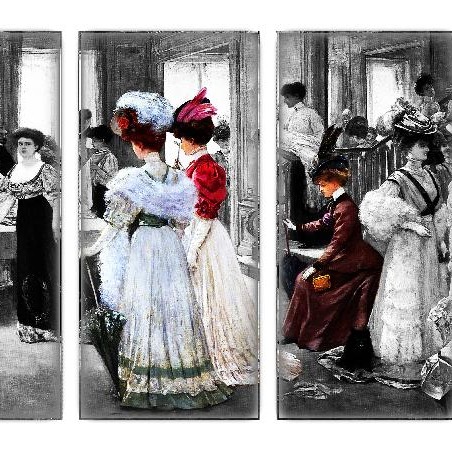 Under the new Theatres Act of 1843, the patent system in Britain was abolished, allowing for the rise of popular entertainment venues, such as music halls and saloons. A variety of hugely popular theatrical art forms developed throughout the nineteenth century, including pantomime, melodrama, burlesque, and the traditional society play. This guide explores the styles and history of these genres, along with key practitioners and playwrights from the era.

Until 1843, theatre in Britain was regulated under a patent system, meaning that officially only theatres granted a royal patent (license) were allowed to stage plays. In London, only the Theatre Royal Drury Lane and the Theatre Royal Covent Garden could produce drama during their winter seasons. However, in practise, this rule was flouted across the country with unlicensed, or illegitimate, theatres staging drama, interspersed with burlesque interludes and/or comic sketches. Under the new Theatres Act of 1843, the patent system was abolished, allowing for the rise of popular entertainment venues, such as music halls and saloons. Although parliament had hoped to control and educate the masses, the unexpected consequence of the act was an explosion of melodrama, burlesque, and music hall that was designed to entertain and amuse its audiences. In the second half of the century, a generation of writers emerged who built on the early melodrama favored in the mid-century and made a name for themselves by satirizing and commenting on upper-class society. However, the dawn of a new century heralded a shift in focus and playwrights such as Henrik Ibsen, George Bernard Shaw, and August Strindberg rejected the melodramatic in favor of realism and naturalism. Melodrama was a hugely popular form of entertainment during the nineteenth century. Its unprecedented popularity during the Victorian period owes much to its appeal to working-class audiences and the growing numbers of so-called illegitimate, or unlicensed theatres (pre-1843). It developed its unique style from the sentimental dramas of the eighteenth century and featured a formulaic plot, in addition to set stereotypical characters, such as an aristocratic villain, a noble hero, and an innocent maiden. Recognized codified gestures conveyed meaning and emotion to the audience and a dramatic tableau was frequently used to highlight emotional moments in the plot. The genre declined in popularity by the end of the nineteenth century but its influence on popular culture has been huge. Sensation novelists drew on melodramatic conventions and the instantly recognizable style of acting can be seen in the silent movies of the early twentieth century.

In the nineteenth century, a burlesque was a short piece of drama or musical interlude that parodied a serious piece of dramatic literature. It would mock the intention and style of the original piece of work, whether it be Shakespeare or a grand opera. Burlesques were usually risque, with plenty of gags and witticisms thrown in. In the early Victorian era, the burlesque followed the style of the ballad opera, which grew in popularity in the eighteenth century (words of songs put to popular contemporary music of the time). However, later burlesques grew up in composition and style, favoring a combination of music hall, revue, and operettas. Madame Vestris became known for her popular burlesques at the Olympic Theatre in London during the 1830s. Pantomime in the nineteenth century was highly influenced by the conventions and stock characters featured in Commedia dell’arte. The English harlequinade and early silent pantomimes had been popular since the seventeenth century, but the pantomime genre came into its own during the Victoria era. Following the 1843 Theatres Act, pantomimes no longer needed to rely on silent slapstick comedy. Witty word play, gags, and audience participation were added into the standard repertoire of mime, fairytale settings, exciting chase scenes, and spectacular transformations. Contemporary characters developed also, with the emergence of the principal boy, pantomime dame, and fairytale creatures. By the end of the century, pantomimes were huge, extravagant spectacles, featuring large casts and clever stage tricks. Theatre impresario Augustus Harris staged a series of hugely lucrative pantomimes at the Theatre Royal Drury Lane during the 1880s, featuring the top names in music hall, such as Dan Leno, Marie Lloyd, and Vesta Tilley.

Society dramas emerged in the Victorian era as a popular combination of social satire, comedy of manners, and risque or taboo subject areas (such as illegitimacy, adultery, or blackmail). Although the plays varied greatly in tone and content, the general formula included a drawing-room type setting, upper-class characters who take their social standing and respectability for granted, and a plot that has love or marriage as its primary end-result. Popular playwrights of the era included Arthur Wing Pinero, Oscar Wilde, and Henry Arthur Jones.

It's Pantomime Season! Oh no, it isn't!

The British Library: Theatre in the 19th century

V&A: The Story of Pantomime

Check your knowledge of this 19th Century impresario!

The Life and Works of Oscar Wilde

Test out your knowledge on this witty, nineteenth-century playwright.

Getting to know nineteenth-century British playwrights!

The nineteenth century marked a shift in dramatic focus following the abolition of the patent system. Test out your knowledge on the playwrights who made their mark on British theatre!

Getting to Grips with Nineteenth-Century British Theatre

How well do you know the plays from the Victorian era? Take our quiz to find out!